Novena through the intercession of Ven. Servant of God Casimir Wyszynski 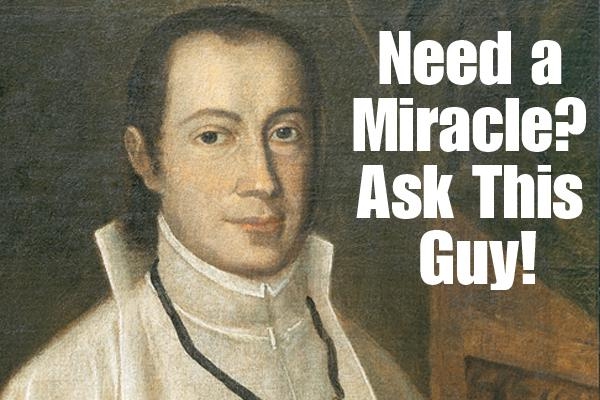 was born August 19, 1700, at the estate Jeziora Wielka near Warsaw, Poland. At his baptism, he received the name Januarius Francis. When he was two, he and his family had to flee from the Swedish Army’s devastation of Poland. After a few years of wandering, the Wyszynski family came back to their estate.

According to his father’s wish, he studied law, preparing for a career at the Royal Chancery. He made a vow to go on a pilgrimage to St. James’ Tomb in Compostela, Spain. Despite his family’s objections, he did not change his decision. He finally received his father’s blessing and set out for Rome. He arrived in the Eternal City in 1721 and soon left for the remaining trip with a group of pilgrims. He was forced by illness to return. In Rome, his vow of pilgrimage was changed to visiting Rome’s Churches and carrying out works of mercy.

While visiting Shrines of the Eternal City, young Wyszynski met Fr. Joachim Kozlowski, procurator of the Marian Order. He heard that his brother (who was in the Marian novitiate) had done much harm to the new Order. Moved by this news he said: “I want to make up for what my brother ruined, I ask you for the habit.” He took the white Marian habit November 18, 1723, in Rome and accepted the name Casimir of St. Joseph. After returning to Poland, he entered the novitiate and in 1725 made his religious vows.

One year later, he was ordained a priest. From the very beginning of his religious life, he distinguished himself in his zeal for evangelical perfection, ardent devotion to the mystery of the Immaculate Conception, and active care for those suffering injustice. He also zealously worked for the beatification of the Marian founder, Fr. Stanislaus Papczyński (1631-1701). The members of his community expressed their approval of his work through appointing him novice master, a local superior, procurator at Rome — and twice electing him general superior in 1737-41 and 1747-50.

In these positions, he helped the Marians grow in merit and number, made the Marians an international community, and accepted candidates to the Order from all over Europe.

In 1753, he went to Portugal where he founded the first Marian monastery at Balsamao. He died there October 21, 1755, in the opinion of sanctity.

A few years after his death, the beatification process was begun in Portugal and later in Poland and Rome. This process, interrupted during the partition of Poland in the 19th century and the political turmoil in Portugal, was reopened in 1953 in Rome. Many report graces obtained through the intercession of Fr. Casimir. He was declared a Venerable Servant of God in 1989.

His fame of sanctity has lasted 200 years, especially in Portugal where it survived the period of confiscation and closing of religious communities. Even now Portuguese call him “Santo Polacco,” the Holy Pole. This gives us hope for a successful conclusion of efforts for his beatification. However, it depends on our prayers for this intention. Please ask the intercession of Fr. Casimir for your intentions. Please scroll down for suggested prayers included on this page.

From The Writings of Fr. Wyszynski

Christ left us in His own Mother the most perfect example of His life. She knew exactly the ways of God; her holy virtues show us how we should follow Christ. Only by imitating Mary shall we be her true venerators and servants. To imitate the Mother of God means to imitate most faithfully Christ Himself. More than all the saints, she knew Christ’s teachings and way of life.

If we want to be Mary’s true venerators and servants, we cannot limit ourselves only to study her greatness and dignity, privileges, and virtues. Nor is it enough to praise her by prayers and songs, giving some offerings in her honor, or making vows and acts of consecration. First of all, we have to imitate her exemplary life and special virtues. This way we become more like her and therefore pleasing to her.

NOVENA BEFORE THE ANNIVERSARY OF THE DEATH OF THE VEN. SERVANT OF GOD CASIMIR WYSZYNSKI
(the 1st day: October 12)

Prayer for the beatification

Let us pray for the raising to the honors of the altar of the Servant of God Casimir Wyszynski and for his intercession before God on our behalf:

O God, joy of the saints, make us glad by the raising to the honors of the altar of Your faithful servant Casimir and grant us the zeal to imitate him on our way to holiness. Amen.

Prayer for a Special Grace through his intercession

O God, Merciful Father, in the heart of Your Servant Casimir, You aroused such a great zeal for accomplishing corporal and spiritual deeds of mercy; deign to grant to me (us) through his intercession the grace……    for which I (we) implore You. Amen.

Our Father… Hail Mary… Glory be to the Father…

Notice: It is recommended that this prayer, recited for a particular intention, be complemented by Confession and Holy Communion. Please send the news about any cure or other graces received from God through the intercession of Fr. Casimir Wyszynski, requests for biographies and prayers, as well as any other correspondence, to the following address: