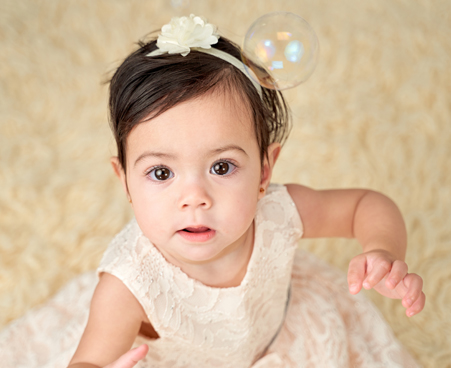 Luisa Amelia was born on November 10, 2017. She is the first child of our only daughter, Julia, who was 38 years old when she gave birth. Luisa is also, in our hearts and in our minds, our “miracle” granddaughter.

Julia and Gustaaf got married in 2012. Theirs was a quick courtship, so they decided to delay starting a family in order to get to know each other better, and hopefully attain greater emotional as well as financial stability. By late 2015, they felt ready to become parents, and we, impatient to become grandparents, were cheering them on.

Neva and I were in Manila late February 2016, and, by God’s providence, our Tuesday Prayer Group decided to undertake the 33 Days of Consecration to Mother Mary. We had never been conscious Marian devotees, but the program opened our eyes and hearts to see Our Lady as not just the Mother of Jesus but as OUR Mother, who longed to bring us ever closer to her Son. She became Our Intercessor and Our Consoler, and when we consecrated our lives to her on April 4, 2016, we pledged to pray her rosary daily, and our constant prayer was for the blessing of grandparent-hood.

Returning to Vancouver, we discovered from Julia that their attempts to get pregnant was not fruitful and that both she and her husband had to undergo tests to determine if there was a problem. True enough, there was a problem. Julia’s fallopian tubes were blocked with scar tissue from a previous operation. Surgery was recommended to clean out her fallopian tubes, but in the end one tube was too badly damaged to be saved and had to be removed.

She consulted a number of medical specialists after that, including a fertility expert. With her age, irregular menstrual periods, and only one fallopian tube, they were not very optimistic, giving her anywhere from a 20-30% chance of becoming pregnant. She was advised to look early into the IVF procedure as well as to other fertility procedures. They even looked into the possibility of adoption.

While Neva and I continued to ask Our Mother Mary to intercede for Julia and Gustaaf, we were very mindful of the doctors’ prognosis and the possible health-related dangers of a first pregnancy at her age, either for the mother or the child. So our prayer was always: “Thy Will be done, Oh Lord, not ours.” Two months after her surgery, Julia and Gustaaf came to our apartment and, with huge grins on their faces, gave us a small gift bag. Inside we found a baby’s pacifier and a photo of an ultrasound. Neva screamed with delight because she knew at once what the gift meant. I stared at the items, not comprehending at first because I mistook the pacifier for a wine stopper. When it finally dawned on me what the gift meant, I also started screaming and crying with joy. Julia said she was due in early December. I secretly hoped she would give birth on December 8, the Feast of the Immaculate Conception, because I was certain that it was Mama Mary’s powerful intercession at work here. Against all odds, Julia had conceived.

But it was not to be an easy pregnancy. Standing 4 feet, 11 inches, and weighing in under 100 lbs, Julia is a petite woman with narrow hips. As the baby grew, Julia’s belly bump grew more pronounced. But as one doctor put it, anatomically, Julia didn’t have “enough real estate” down there, hence the baby could not move around much and settled in a breeched position. All throughout the pregnancy, there were ultrasounds done to check the baby’s position. It never changed, but they did tell us that our first grandchild would be a girl.

By this time, our prayers were now directed toward the health of, and a safe delivery for, mother and child. Back in Manila for a company board meeting, we hosted our prayer group meeting on July 12, 2017. Randy, one of our members, invited a Marian priest, Fr. Nick (Fr. Mariusz M. Janiszewski) of the order of the Marians of the Immaculate Conception (MIC) to celebrate our re-consecration to Mama Mary with the Holy Sacrifice of the Mass. We approached Fr. Nick afterwards to ask him to pray for Julia and our grandchild, and to our amazement, he told us that their congregation’s founder, St. Stanislaus Papczyński, was the “Patron Saint” for difficult pregnancies. He gave us a card with a relic of this holy man, and we put it in our altar, as confirmation that Mama Mary was listening to our prayers, and assuring us that everything would be fine.

We returned to Vancouver in October. Julia told us that the baby was still “breeched” and that her OB-GYN was worried about allowing the baby to reach full term. To prevent complications, Julia was scheduled for a Caesarian delivery five days before the Baby’s D Day (December 10). Julia was devastated. She was worried about her baby and afraid of the operation. Not only would recovery be more painful, her insurance would not cover the medical expenses for the operation, thereby putting a strain on their financial resources.

On November 10, a whole month before D Day, Gustaaf woke us at 5:00 am to say they were in the hospital, and that the baby was coming. It seemed that, after months of being content in a breeched position, the baby had decided to stretch and turn, and in the process, caused Julia’s water bag to break. The doctor was going to induce labor, but depending on the baby monitor, cautioned her that a CS was still possible.

Luisa Amelia was born close to 11:00 pm that night. Again, against all odds, it was a natural delivery. As she lay on her mother’s breast, we found ourselves crying tears of relief, of joy, and of wonder.

Being one month pre-mature, she spent the next 6 days in an incubator in the Natal ICU of the hospital, as this “5 lb 3 oz baby with the loudest voice”. Luisa is now almost 18 months old and she is absolutely adorable. She has filled our home with her toys, her bed, her high chair, her ready smiles and laughter. And yes, she still has the loudest voice in the room.

It has been said that every child that is born into this world is a miracle of life. But with Luisa, the miracle was also one of Faith and Trust in God’s love and mercy, and Mary’s intercession.