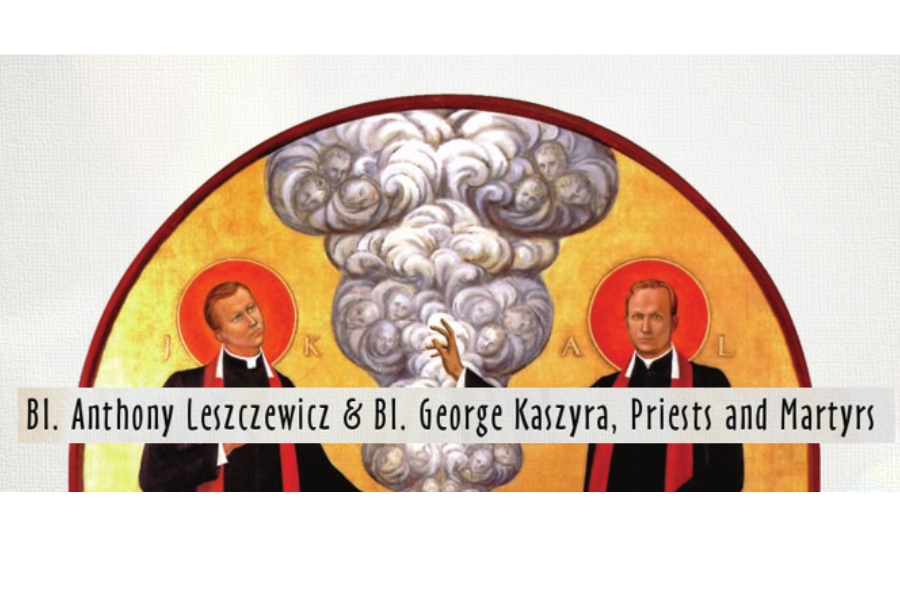 It is said that there were more martyrs in the 20th century than in all centuries of Christian history combined. The number of martyrs in World War II are countless, St. Maximilian Kolbe and St. Edith Stein being two of the more well-known. But did you know that two Marians of the Immaculate Conception were also martyred during the Nazi occupation of Belarus? They are Blesseds Anthony Leszczewicz and George Kaszyra, and we celebrate their feast day on June 12.

The year was 1943. The town was Rosica, in Belarus, where the Marians had a mission parish. The Bolsheviks had occupied the town in 1939, and the Germans had taken occupation in 1941. The Nazi regime was coming over the Latvian border, and the residents of little town knew that danger was imminent.

One of the religious sisters on mission in the town survived the persecution and gives an account of the two blessed priests and their heroic witness at that time.

On Tuesday, February 16, bells began to ring. The Germans rounded up the first groups of people and held them in the church in Rosica: Mothers with babies, children, youngsters, and old people. They also herded us Sisters inside. In the church there was shouting, crying, and despair. At the request of Fr. Leszczewicz, a German read out our names and ordered the Sisters to leave the church and go to the rectory. The priests stayed in the church during all of Tuesday and all night. They celebrated Holy Masses, listened to confessions, and administered other sacraments.

On Wednesday, February 17, Fr. Kaszyra came to the rectory, heard our confessions, and gave us Holy Communion. During the day, the priests persevered in their priestly ministry in the church. We kept bringing bread, milk, and whatever we had to the church, especially for the children.

In the afternoon of February 17, about 4 p.m., Fr. Leszczewicz appeared. He said farewell to us. He was full of joy. He said with a smile: “Bear up and pray. I am going to show them the warehouse.” And he never came back. When we tried to return to the church, the officer stopped us and didn’t let us in. He said that Fr. Kaszyra would come right back. Late in the evening, Fr. Kaszyra actually returned and said to us: “Father Leszczewicz is already dead and tomorrow I will be dead, too.”

At night, from Wednesday to Thursday, February 17-18, the Sisters were continually praying in a bedroom. In the dining room, Fr. Kaszyra kept vigil all night long. He was praying, walking around, kneeling, and prostrating himself. On Thursday, February 18, he brought the Blessed Sacrament from the church and distributed it among us. At 10 a.m., Fr. George Kaszyra was taken away. In front of the church, he was ordered to mount the sledge. He was taken away among many other sledges. He bade farewell to us, turned toward Druja, and then said: “Pray and ask forgiveness from God for my sins, because I will face God’s judgment in a few minutes.”

Together with Sister Rozalia Marcilonek, we went back to the rectory and we looked through the window at the entire convoy. Father George Kaszyra was in the first sledge. They went uphill and turned right. A moment later, the entire hut erupted in flames. Rosica and the neighboring villages were being burned. The whole sky was on fire; and when the fires burned out, partially burned bodies, piled together, could be seen.

Most of us can only imagine the terror experienced in Rosica, but the heroic witnesses of these Blessed Marians can be an inspiration for us all, especially in the troubling times of today. Only the Lord knows how each of us will be called to witness to Him throughout our lives. May we daily imitate the witness of these martyrs, and die to ourselves, and be open to God if He does desire a “red martyrdom” of us.

Let us turn to Blesseds Anthony and George and ask for their intercession and assistance. For these heroic Marians to be canonized saints, miracles must be attributed to them, approved by the Holy See.

If you or a loved one are going through a trial and in need of a miracle, pray for their intercession:

Prayer for the Canonization of the Blesseds Anthony and George
Most Holy and undivided Trinity, You choose to live in the hearts of Your faithful servants, and after death to reward their merits with the glory of heaven. Grant, we implore, that Your servants, Anthony and George, who with apostolic zeal faithfully served the Church under the patronage of the Immaculate Virgin Mary, may be numbered among the saints, through Christ our Lord. Amen.

Send news about graces received from God through the intercession of Blesseds Anthony and George, requests for biographies and prayers to the following address: Vice-Postulator of the Marian Causes of Canonization,Eden Hill, Stockbridge, MA 01263.